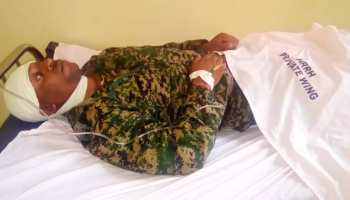 Lt. Col. Ronald Kakurungu, the Deputy Army Spokesperson says that hooligans attacking soldiers enforcing curfew directive with stones and those attempting to disarm patrollers might end up being shot.

He cites an incident at Ggaba in Makindye division where people attempted to disarm solders that were enforcing curfew but the suspects were managed to be arrested, warning those intending to involve in such activities to desist because they might end up being shot at.

In related development, the Kakurungu has denied allegations of having some soldiers in the UPDF detaches in Karamoja that are conniving with cattle rustlers to steal people’s animals amounting to over 800 herds of cattle, saying that such incident hasn’t been registered though there are still some minor thefts happening in some days by the worriers that ranges from 10-100 cows which is soon to be stopped.

He says that they have managed to recover about 88 guns and 925 rounds of ammunitions since July 15th, 2021 to-date in the disarmament operation exercises that is ongoing in Karamoja Sub region.