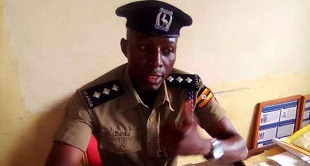 Three policemen have been arrested following the theft of two guns at Bunghoko Police post in Mbale District.

Those arrested include the Officer-in-charge Bunghoko Police Post Celestine Ematu and other two policemen, whose identities were withheld.

On Wednesday night, unknown thugs broke into the police station, located along the Mbale-Tororo road, and made away with two guns and a radio call.

Rodgers Taitika, the Elgon Region Police Spokesperson says that the three were arrested this morning to help in the investigation of recovering the firearms since they were the ones on duty.

Taitika adds that the security personnel comprising the Army and Police have commenced investigations and recovery of the firearms.

The incident in Mbale comes a day after unknown assailants riding on a motorcycle attempted to attack Nakulabye Police Post.

The attack followed a gun raid on Busika police station in Luwero district in which two police officers were killed and two others injured.

The attackers made off with 2 firearms. One of the injured police officers later succumbed to the gunshot wounds.

Security has since blamed the attack on the Uganda Forces for Coalition Change, a rebel outfit.

Posted: Friday 25th November 2022 06:32:54 AM
Next:
Police officers cautioned to borrow with purpose