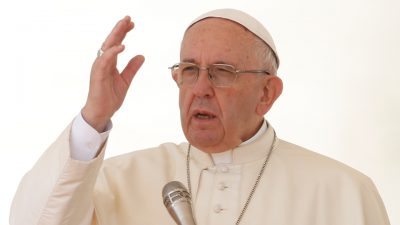 Pope Francis has emphasized the need to learn and speak the language that doesn’t divide but supports and unites people especially in this digital world.

In his 53rd World Communications day message, the Pontiff says that the current media is too speedy in spreading the information which at times becomes a danger from those that spreads false content.

The World Communications Day is celebrated on every May 19th with this year’s theme;”We are members one of another (Ephesians: Chapter 4 Verse 25), From Social Network Communities to the Human Community”.

The Pope says Christians must do more to make sure the media, especially social networks, are places of dialogue and respect for others, rather than instruments for highlighting differences and increasing divisions.

While delivering the Pope’s message to Catholic heads of communication gathered in Hoima diocese for a convention, the Bishop Chairman of Uganda Episcopal Conference Social Communications Commission Rt. Rev. Joseph Franzelli says that communicators need to counter language of hatred, abuse, discrimination and compromising the Gospel.

The Bishop Emeritus of Lira says opening the way to dialogue helps the people to encounter Christ in communion with other people.