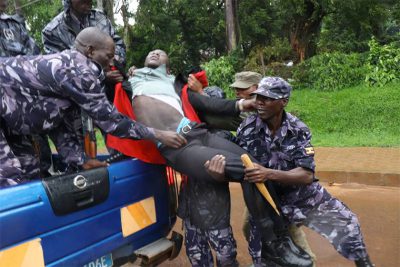 The Parliamentary Committee on Education has come to a standstill after some members demanded for the appearance of the Minister of Education Janet Museveni who had had delegated her junior, the State Minister for Higher Education, Dr. John Chrysostom Muyingo to explain tuition increment at Makerere University.

Mps who included Moses Kasibante, Allan Ssewanyana requested the chair of the committee Jacob Opolot to suspend the committee until Mrs. Museveni appears in person.

She was summoned to appear before the committee to answer to the recent Makerere issues of a 15% fees increment which was rejected by students resulting into a strike that entered the third week since it started on October 22.

However, in reply the committee chairperson Opolot said that the Minister Janet Museveni wrote to him stating that she had other engagements thus proposing to delegate Hon. Muyingo.

In a brief interaction with Dr. Muyingo the Ministry of education denied responsibility of army deployment at Makerere University and requested the committee to summon the minister of defense and security for response.

Muyingo also further referred the committee to the statehouse controller on the issue of continuous state house scholarships at Makerere saying he wasn’t in the know and why there are still students on state house scholars yet in 2016 Parliament passes a resolution to be face out the sponsorship and replace it with student’s loans scheme.

However the MPs on the Parliamentary Education committee have agreed to set up select committees to investigate sexual harassment and torture on Makerere students during the 15% fee rise strike.

Posted: Wednesday 6th November 2019 01:28:32 AM
Next:
Ingrid summoned to court over beating a police officer

Previous:
UGX 11.3billion to be spent on the operationalise Mbale Masaka among other regional cities