Ingrid summoned to court over beating a police officer 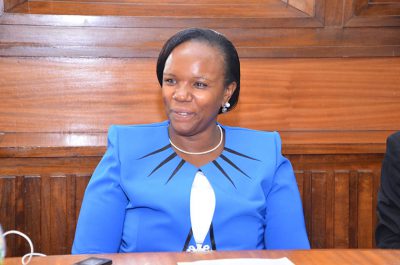 The Buganda road court has issued criminal summons to the FDC secretary for mobilisation Ingrid Turinawe after she missed court.

The summons has been issued by the grade one Magistrate Stella Amabilis on request by the state prosecutor Miriam Njuki on failing to appear in court.

However the defense lawyer Isaac Ssemakade had told court that his client had been arrested on Monday by police on her way to Namboole stadium for her political party conference but court played a deaf ear.

Ingrid is charged with being a public nuisance and according to prosecution on 4th/08/2019 while at CPS Ingrid assaulted detective sergeant Patrick Alunyu causing him bodily harm.

Ingrid had gone to visit the six FDC members who include Simon Wanyera,Waiswa Abdalla, Augustine Ojobire,Kabali Joel,Fatuma Zainah and Katumba Moses who are accused of having assaulted the Buganda road grade on Magistrate Gladys Kamasanyu while she was delivering a judgment for Dr Stella Nyanzi in August.

However in court today still ssemakade also a lawyer to the six FDC members who are on bail prayed today that court amends the charges of his clients because they are not well laid and this prompted the magistrate to give two days to state to amend the charges.