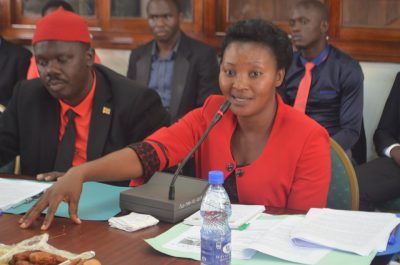 The leader of opposition in parliament Winnie Kiiza wants parliament recalled from recess to debate on the escalating insecurity in the country.

Kiiza told the press at her offices in parliament that Uganda is becoming insecure to all and those in charge of security especially Lt. Gen. Henry Tumukunde and IGP Gen. Kale Kayihura need to explain to parliament why the country is degenerating to such a level.

Yesterday while in Hoima at the burial of Susan Magara, the Security Minister Lt. Gen Henry Tumukunde said that security organizations recognized a few oversights in tracking the killers of Susan Magara, who was found dead after spending 20 days with kidnappers.

Kiiza says that heads of security organs in Uganda were busy fighting among themselves and seeking attention from President Yoweri Museveni which has diverted them from doing their job of protecting Ugandans and their property hence the reason for the worrying security incidents that are occurring in Uganda.

They are busy looking for attention from the head of state to see who gets to become ‘the blue eyed’ boy of the President.

Posted: Saturday 3rd March 2018 07:02:27 AM
Next:
WOMEN GUARANTED OF SECURITY AMID KAYIHURA RESHUFFLE