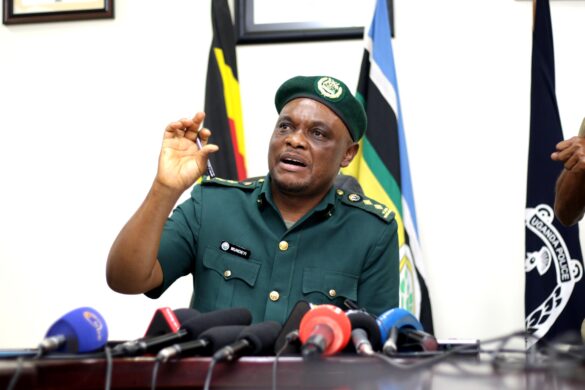 The Ministry of Internal Affairs has threatened to sue the travelers accusing workers at the International Airport Entebbe of extortion and corruption without evidence.

This is contrary to what the Uganda Civil Aviation Authority -UCAA said after  authorities admitted to the corruption tendencies among workers at Entebbe Airport, warning to publish a list of the former staff of the service providers affiliated to the airport but convicted and dismissed.

The regulator of the aviation industry in the country said in response to a growing concern about how travellers are being ripped off their hard-earned money at the airport that it had in the past terminated contracts and withdrawn access passes of errant staffers.

Now speaking to the Journalists at the Police Headquarters in Naguru today, Simon Peter Mundeyi, the Ministry of Internal Affairs Spokesperson defended the institution saying such corruption allegations are quite sensational and defamatory by the travellers who have no proof.

But Mundeyi noted that those with valid cases of extortion from the Airport should deliver them to the relevant authorities with enough evidence so that they can be investigated and have the culprits arrested.

Meanwhile, Mundeyi warned that they will also arrest the people who bribe their staff at Entebbe Airport, especially those that want quick services.

Posted: Tuesday 24th January 2023 06:19:17 AM
Next:
Police to charge suspected vandals with terrorism