Fundraising for the Catholic Television in Uganda is on course 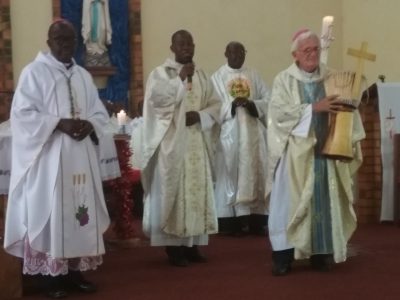 The Executive Secretary Catholic Social Communications Office Fr. Philip Odii has acknowledged the contribution of Catholic Communicators in taking stewardship of the communication offices, radios and the press the Bishops entrusted them.

Fr. Odii says their efforts have led to the urgency to start a Catholic Television and Kampala, Mbarara and Hoima dioceses are so far the leading in the fundraising exercise as of let according to the bank account.

They have so far contributed UShs 60, 53 and 35 million respectively while the entire Tv project needs UShs 2 billion to start.

He says the Catholic Church is committed to using modern media to evangelise the world that is why it currently has 10 radio stations and the press working towards social and spiritual transformation.

However the Catholic Radios are constrained with the high broadcast license fees that have been increased over and above 300% by the government. Bureaucracy in getting Radio frequency and prepayment of the radio license are all making it difficult for the Catholic Church to run the radios.

He also prayed for the responsible use of the media including the modern or social media to promote understating and love as demanded by the Pope.