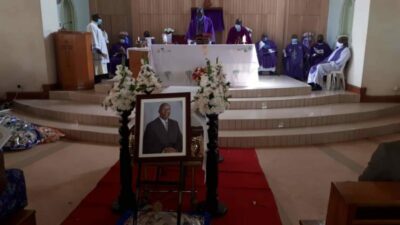 The Ministry of Education has paid tribute to the fallen Professor of Science and Science Education at Makerere University Joseph Chrysostom Oonyu who has exceptionally contributed immensely to the Academic world here and abroad.

In her condolence message to the bereaved family during the requiem mass at St. Augustine’s Chapel Makerere, the first lady also the minister of Education Janet Museveni through the permanent secretary of Education Alex Kakooza, said the late Prof. Oonyu has been instrumental in the work of education for over 10 years.

At the time of his death he had been tasked to Lay the foundation of the National Teacher Policy and had been just appointed to head the task force for establishing the National Institute of Teacher Education UNITE, and assured to make Uganda proud in this line. His humility and exemplary service will always be remembered.

The Vice Chancellor Makerere University Prof. Barnabas Nawangwe said Prof. Oonyu has contributed to education curriculum, teaching, learning material and programs at all levels of academics in Uganda, chaired boards and consultancies giving his vast knowledge to many right from the secondary to university level.

He adds that the late Joined Makerere in 1991 as an assistant lecturer at the college of Education and external studies and was among the pioneers of the biology and environmental programs. He published widely in areas of science and science education and supervised several under graduate projects.

His wealth of experience in science, technology, engineering and mathematics always propelled him to conduct a number of out rich projects in science. He was not only an academic but a keen administrator.

The Chaplain St. Augustine’s Chapel Makerere University Fr. Josephat Ddungu described the late as a God fearing person, punctual, committed and ever ready to lend a hand. In short, he lived a life a priest and church cannot lie about which at times lacks to some people.

Prof. Oonyu died of heart failure on October 13, 2020 at 63 years of age, survived with a widow and three children. He will be buried in Okum, Kibaale Sub County in Pallisa District on Friday October 16, 2020. He has been a brother to the Secretary General Uganda Episcopal Conference Msgr. John Baptist Kauta.