Candidates vow to serve after Nominations for MP slots. 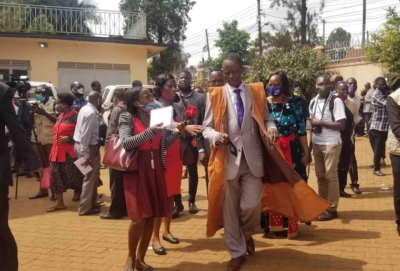 Over 50 contestants have been nominated to contest for Kampala parliamentary seat on the first day of the nominations of the aspiring candidates conducted by the Electoral Commission that is ending tomorrow.

According to returning officer of the electoral commission Fredrick Muwaya Tibakuno noted that many had booked to be nominated today but some haven’t been nominated for various reasons.

Former members of parliament are among those who have been nominated to contest in the 2021 general elections and those nominated include the three term former mp Rubaga South  Ken  Lukyamuzi ,the   two term former Kawempe South MP  Ssebuliba Mutumba, the one term mp for Rubaga North  and currently the minister for lands ,housing and urban development  Betty Olive Namisango Kamya  ,Fred Ruhindi the two term MP for Nakawa among others.

Among the reasons that have inspired them to again stand for these elective positions include effective representation on the floor of parliament because the current MPs haven’t represented them well and the voters issues haven’t been presented.

Also the youths are among those that have been nominated to contest for member of parliament in Kampala district these include Aloysious Mukasa for Rubaga south ,Joel Ssenyonyi Nakawa west, Bosco Lusagala Makindye west among others.

Ssenyonyi who is a hold the flag for National Unity Platform (NUP) has laughed at the people underestimating his contest for Nakawa division parliamentary seat and said he is ready to battle with the National Resistance Movement’s (NRM) candidate Fred Ruhindi.

Nathan Gahungu, the candidate for Kawempe South on Ecological Party of Uganda (EPU) flag has promised to deliver green environment in Kampala and lobby for development of women.

Outside Kampala the Nakaseke South Mp Paul Lutamaguzi (DP) shortly after his nomination for the second term he declared not to contest for the third term in 2026 once voted back to parliament in 2021-2026.

Lutamaguzi is tightly facing off with the NRM candidate Charles Nsereko.