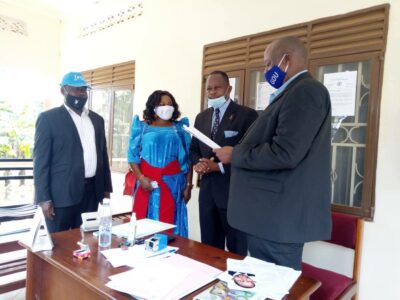 The Opposition Forum for Democratic Change-FDC party leadership in Masaka district is contemplating forming alliances with other opposition candidates after failing to field candidates for all parliamentary positions in the area.

FDC has only managed to front two candidates out of the six parliamentary seats Masaka district.

They include Godfrey Kayemba Afaayo, the incumbent Mayor of Masaka City who has been nominated for the Kimanya-Kabonera Division parliamentary seat and Lydia Nalunkuuma who is running from the Masaka City Woman MP seat.

Joseph Ssezonga, the FDC General Secretary for Greater Masaka sub-region, says they run short of candidates who would contest on the party ticket for the available parliamentary positions in the area.

Besides parliamentary candidates, FDC also failed to field candidates for elective local government positions. However, Ssenzoga says this presents the party with an opportunity to better reorganize for the tough times ahead with a few committed people.

Previous:
Security seal off NUP and take their 7 million signatures.