Cycling save environment from air pollution 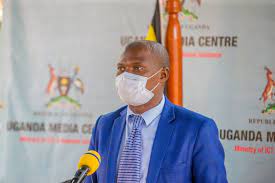 Ugandans especially those living in Kampala have been urged to embrace cycling to save the environment from Air or Carbon pollution.

Minister Kyofatogabye says given that the bicycles don’t produce air pollution as vehicles, they should be used in society by the people so that the environment is protected.

This has been said by the Minister of state for Kampala Kabuye Kyofatogabye while flagging off a 5km High-Level bike ride in Kampala aiming at creating awareness about the challenges of pollution in the city.

The ride has been organized by; the First African Bicycle Information Organization (FABIO), UN-Habita and Kampala Capital City Authority (KCCA).

Minister Kyofatogabye said that Earth’s inhabitants, especially humans and other living things, are at the verge of collapse due to an increasing pattern of global warming orchestrated by their own actions.

He disclosed that as leaders of KCCA they are working day and night to provide favorable environment for cycling in Kampala to minimize Air pollution, traffic jam and congestion not forgetting a number of policies such as the National Climate Change Policy 2015 and the National Climate Change Act of 2021 all aimed at making the country safe for all.

The commissioner Transport Regulation safety at the Ministry of Transport, Winstone Katushabe said they have a duty to remodel roads in Kampala to make them favorable for cycling, urging drivers to respect cyclists.