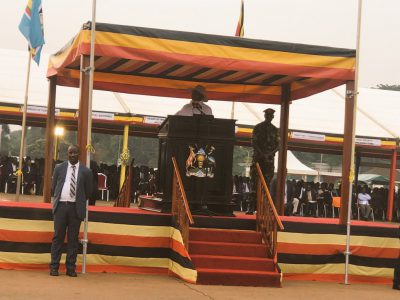 Museveni said with the road network and electricity he is seriously looking at railway transport that will lower the transport costs, proper budgeting , production of oil and financing of heavy investments through the Uganda development bank at affordable interest rates Uganda’s growth will double the current 6% growth level.

Addressing the country at the 57th Uganda’s Independence Day anniversary in Sironko Museveni said Uganda has been able to pacify its boarders and supported neighbouring countries to have peace with the UPDF but its main challenge is to achieve economic growth and development with a double digit.

He said federation and supporting regional major projects is another opportunity to Uganda’s growth, African countries and the entire continent because bullying from the developed world through sanctions on poor countries can only be fought when there is coherence.

The special guest President Emmerson Dambudzo Mnangagwa from Zimbabwe hailed President Museveni for his vision that has put Uganda at a steady growth level and courage to them who are just 39 years of independence and struggling with international sanctions.

The celebration under the theme; “Consolidation of National Unity, Security, Freedom and Prosperity”, has been made simpler by schools and community groups that composed songs and poems that are being performed to the guests.

Among the pupils who have recited poems is Buganda Road Primary School from Kampala that has presented a poem a “thorn that hurts” showing the challenges in the country.

The poem highlighted how malaria is still one of the leading killer diseases in Ugandans yet it could be prevented.

The Archbishop of Tororo His Grace Dr. Emmanuel Obbo who led the independence prayer at Sironko play ground prayed for peace, prosperity and wisdom for the leadership in this country.

Later President Museveni led the award of over 100 medals to different people for their distinguished services including President Mnangagwa who got the Chancellor of National Honours Award.

Uganda got independence on 9th October 1962 when Uganda under the leaders of the late to independence from the British colonialists under the Governorship of Sir Andrew Kohen. However this was achieved following fierce demonstrations demanding for self rule after 68 years of British rule.

Previous:
Mother Mary the only way to a peaceful Uganda