Police got surprised to see Bobi Wine in the city. 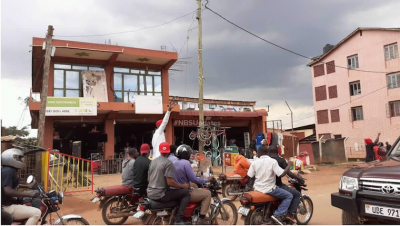 Kyadondo East MP, Robert Kyagulanyi alias Bobi Wine has caused fracas in Kampala city center after beating the security that surrounded his home to stop him from leaving for his Osobola concert at one love beach busabala.

Allover a sudden Bobi Wine appeared in town at Gaza land arcade dodged arrest by moving on a boda boda a situation that paralyzed the business activities but the heavy rain pour cooled the situation.

Police deployed at the home of Kyadondo East MP, Robert Kyagulanyi in Magere in Kasangati Town Council in Wakiso district and his Busabala based One Love beach purportedly to stop him from ‘committing crimes’.

The Kampala Metropolitan Police spokesperson, Patrick Onyango, says police have received information that despite police decision to stop the show, Bobi Wine had decided to proceed with the illegal concert.

Onyango says as result, police took a bold decision to block Bobi Wine from leaving his home to prevent him from committing crime.

Onyango insists that police will never allow an event that has fallen short of the guidelines outlined by the IGP to take place.

According to Kyagulanyi, police have blocked more than 125 music concerts where she was scheduled to perform since he joined politics in May 2017.