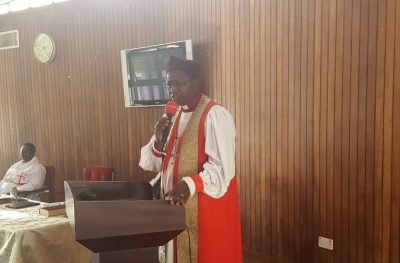 Archbishop of the Church of Uganda, Dr. Stanley Ntagali has pronounced at Parliament that the Church will never leave matters of leadership and politics to the hands of only the elected politicians.

Bishop Ntagali while leading Ash Wednesday prayers today at Parliament stated that politics is a way of governance of the society and stakeholders that cannot be limited to a certain class of people.

This follows days after President Yoweri Museveni clashed with Rwenzori Diocese Bishop, Rt. Rev. Reuben Kisembo during the commissioning of the Kyebambe Girls Secondary School, where he openly told Museveni to retire after the end of his current term in 2021 to allow Ugandans chance to witness peaceful transition of power.

However, President Museveni described Kisembo’s comments as the indiscipline of the highest order.

Ntagali emphasizes the church is responsible for advising government and other leadership structures in order to have good guided citizens.