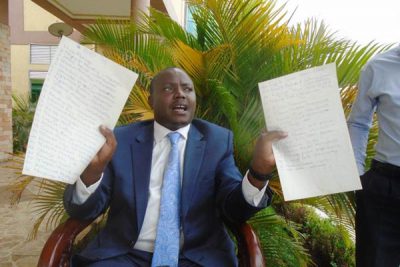 Government has recalled the titles issued to the State Minister for Water and Environment Ronald Kibuule for the disputed land in Kigaya- Golomolo, Buikwe district.

It is alleged that last year, Kibuule, who is also the Mukono North Member of Parliament, fraudulently acquired ownership of land measuring more than 85 acres on Block 369, Plot 10.

Pronouncing the ruling notice in regard to the ownership dispute between Minister Kibuule and Buganda Land Board (BLB), the Senior Registrar of Titles Joseph Kibande asked the legal team of the Mukono North MP to present the titles for cancellation.

He says that they discovered that the land in question is an official estate which qualifies it to be part of the land properties that were returned by the Central government to the Kabaka of Buganda Ronald Muwenda Mutebi II’s under the Restitution Law.

However, Kibuule’s Lawyer Ambrose Tebyasa disagreed with the ruling saying that they are to appeal in court since the land registration failed to fully ascertain the authenticity of the documents presented by them.

The BLB Lawyer Deo Kalikumutima emphasized that they are ready to battle with Kibuule until he concedes that he fraudulently acquired the title.

It is alleged that the contested land formerly under the official Mailo land of the Namasole (Queen mother of reigning Kabaka of Buganda,) is under the management of BLB as per the Restoration Law through which government returned property belonging to cultural institutions.