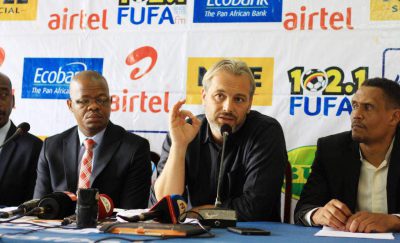 The Federation of Uganda Football Associations (Fufa) has disclosed that the government has released funds with some of it to cater for monthly stipends for 50 players for six months.

Eng. Moses Magogo, the FUFA President said on Wednesday that for the start, 50 national team players will be paid from January to June of this year UGX1 million each month before government includes the next payments in the next financial year.

The development is a huge boost to the development and promotion of football in the country where players in the national team are only paid allowances and winning bonuses.

We understand that FUFA delegation led by Magogo met with the President of Uganda Yoweri Kaguta Museveni last month in Rwakitura and he accepted to invest more in football. He said besides the monthly retainers for the national team players whose names will be supplied by the national coach, the players will also have full medical insurance and pre-tournament medical assessments.

Magogo said they are very appreciative of the government because they have also released finances to cater for salary for the new coach Sébastien Desabre for the next six months.

In the past the government is only paying monthly stipends to athletes who win medals for the country international competitions.

Previous:
CHAOS IN POLICE COURT AS KIRUMIRA TRIES TO SNEAK OUT