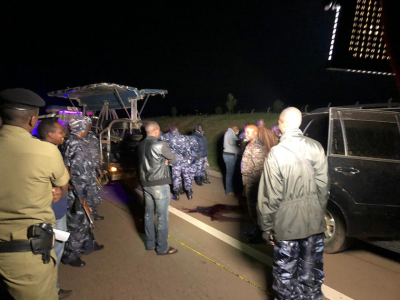 A police constable identified as Davis Taremwa attached to the counter-terrorism unit has been arrested for the alleged murder of a Rwandan National Florence Kamikazi and Joshua Nteireho Ruhejera.

The Police Spokesperson Fred Enanga only said that Taremwa was arrested at Hidden Treasure Hotel, Entebbe by security operatives promising to give more details in a short while.

Princes Sylvia Kamikazi believed to be a Rwandan National and Joshua Ntireho Ruhejera at Entebbe were shot dead along the Entebbe Express Highway at Nambigirwa Bridge, towards Mpala, Katabi Town Council last night. They were travelling in a black Prado registration number UAW 534B heading to Entebbe.

Security operatives recovered an AK-47 rifle No. UG POL56-3100699022697 with 27 rounds of live ammunition and three empty cartridges at the scene, One Counter-Terrorism Uganda Police cap and a magazine porch.

Entebbe police says it was informed about the duo’s shooting by a police officer, Constable Musiyi, attached to Uganda National Roads Authority – UNRA at Nambirigwa bridge at Mpala-Kitara, Katabi town council, Wakiso District at around 11pm.

Joshua is said to have been killed while trying to confront the enemy, he was shot on the left upper head ripping through the right side shuttering the brain hence killing him instantly,” reads the police report.

Ntireho is said to have been close to the first family given the social media photos showing him posing with First Son Lt Gen Muhoozi Kaneirugaba, sitting and standing inside and outside State House and in Church with President Yoweri Kaguta Museveni and First Lady Janet Kataha Museveni.

Posted: Saturday 7th September 2019 07:06:39 AM
Next:
Pope Francis end his trip in Mozambique calling for Peace and Reconciliation in Mozambique

Previous:
UJCC calls for national dialogue for reconciliation in Uganda