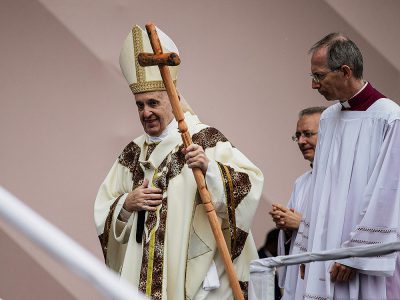 The country is also devastated by Brutal jihadist attacks in northern Mozambique that have claimed more than 300 lives over two years and forced thousands from their homes.

Speaking in Portuguese, he asked them not to follow the old law of retaliation “an eye for eye, a tooth for a tooth, warning that violence was “an endless spiral that comes with a very high cost, emphasizing that Mozambicans had a right to peace.

Mozambique is said to be a mainly Christian country with 28 percent of her population being Catholic.

Earlier Friday, the pope visited an AIDS care centre on the outskirts of Maputo, hailing the carers for responding to their “silent cry” for help in a country ravaged by the disease.

According to UNAIDS, 2.2 million Mozambicans — 60 percent of them women — were HIV positive in 2018 in the southern African nation of 27 million people.

Pope Francis is the first pope to visit Mozambique since John Paul II in 1988 and has ended the three-nation tour currently headed to Madagascar from 6th to 9th September and ending with Mauritius where he will spend only 8 hours.

Mozambique and Madagascar are among the world’s poorest countries and Francis’ decision to visit is seen by commentators as an act of solidarity from a cleric who was a frequent presence in the shantytowns of Argentina and is now called the “pope of the poor”.

Previous:
A Police constable arrested in connection to the gruesome murder on Entebbe Express