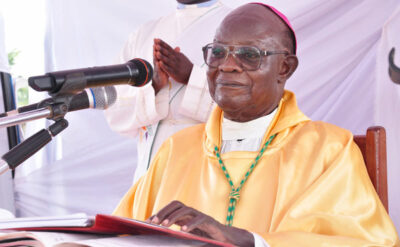 The Chairman Uganda Episcopal Conference Rt. Rev. Joseph Anthony Zziwa and the Archbishop of  Tororo Most Rev. Emmanuel Obbo regret to inform you of the death of the Most. Rev.  James  Odongo Archbishop Emeritus of Tororo.

The Archbishop passed on this morning Friday December 4. 2020 at Nsambya Hospital.

Archbishop Odongo was born 27 March 1931 in the village of Molo, in present-day Tororo District, in the Eastern Region of Uganda. He was ordained priest on 22 December 1956 and served as priest in the Diocese of Tororo until 25 November 1964. He has served as Auxiliary Bishop of Tororo, from 25 November 1964 until 19 August 1968.

On 2 January 1999, Archbishop Odongo became the first Archbishop of the Roman Catholic Archdiocese of Tororo. He retired from that position on 27 June 2007. He has died at t 89 years of age.

“May his Soul rest in Eternal