Cardinal Nsubuga will never be forgotten 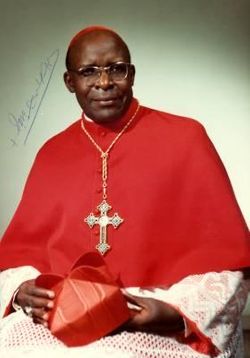 Its 29 years now since the loss of a flamboyant man of GOD Emmanuel Cardinal Kiwanuka Nsubuga the first Archbishop of Kampala and Cardinal of Uganda.

Cardinal Nsubuga died on April 20 1991 and had started a number of projects in line with his calling including religious institutes like the Good Samaritan Sisters at Nalukolongo who are taking care of the most vulnerable and elderly and the Brothers of Amans that are helping in restoring the spirit of prayer among other duties.

According to the Information Director Kampala Archdiocese Fr. Joseph Nkeera Cardinal Nsubuga is remembered for his courageous leadership and for steering the Catholic church during dictator Idi Amin’s time, one of the most trying political periods in Uganda’s history.

During his time, the late Cardinal Nsubuga was referred to as a great “statesman and a far-sighted religious leader, who used to guide his flock spiritually and at the same time, warned the civic leaders against abuse of human rights.

Fr. Nkeera says Cardinal Nsubuga was a true patriot because he  was mostly concerned with the sufferings of the people of Uganda in general. It is on record that he even went to an extent of asking Pope John Paul II in 1985 for permission to actively participate in the peace talks in Kenya between the NRA and Gen. Tito Okello Lutwa, who had just ousted president Milton Obote. The Holy See granted him the permission and; the prelate flew to Nairobi where he is said to have made tangible contributions in bringing the two sides together before he flew back to Kampala.

On the side of spiritual touch he was known for the moving homilies that is when he developed the idea of building a Major seminary to take on seminaries from higher institutions of learning like university to start priesthood. This is St. Mbaga Major Seminary Ggaba that has produced two bishops so far Bishop Christopher Kakooza of Lugazi and Bishop Paul Ssemogerere of Kasana Luweero.

Meanwhile Msgr. Charles Kimbowa the senior secretary in Kampala Archdiocese says Cardinal Nsubuga loved his people that are why he never shied away on their plight.

The late cardinal Nsubuga retired in 1990 and was succeeded by Cardinal Emmanuel Wamala who is currently retired and lives at the priestly center Nsambya.