I have never been bought but fighting for a Peaceful election- Dr. Lwanga. 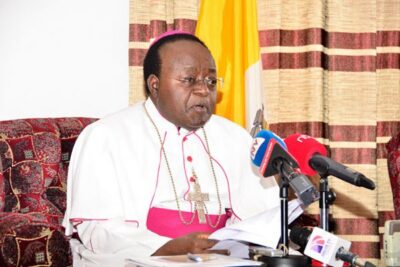 The Archbishop of Kampala Dr. Cyprian Kizito Lwanga has announced a Novena; a 9 day’s special prayer for reconciliation, Peace and Harmony in Uganda specifically for the forth coming general elections that are starting on January 11th to February 3rd 2021.

The Novena is starting on January 3rd to 12th January 2021, which is also the closing date for the general campaigns ahead of the elections for the top seats in the country for the President and Members of Parliament whose elections are to be held on January 14th 2021.

Dr. Lwanga says all Catholics should observe the Novena and have to recite St. Francis’ peace prayer, at home and do acts of charity while on Sundays they have to participate in the adoration of the Blessed Sacrament at the parish church will be taken at 3pm every day for the 9 days.

Already tempers are high for both the supporters and candidates in the race with the opposition accusing the Electoral Commission for not providing a leveled ground for their campaigns. The EC chairman Justice Simon Byabakama with effect from December 26, 2020 suspended campaigns in specified districts and cities under Section 12 (1)(h) of the Electoral Commission Act; Section 21 (1) and (2) of the Presidential Elections Act, 2005  among them; Kampala, Mbarara, Kabarole, Luweero, Kasese, Masaka, Wakiso, Kabarole, Jinja, Kalungu, Kazo, Kiruhura, Mukono and Tororo because of the surge in the Coronavirus infection.

This comes after a joint Christmas message as members of Uganda Joint Christian Council UJCC which he read on December 23rd that turned controversial when he said that Parliament should amend the constitution again to allow president Museveni extend his term of office for more three years than holding an election under undesirable restrictions against the Corona Pandemic and evident violation of human rights and oppression of the opposition during campaigns.

Many attacked him for siding with President Museveni and the ruling regime which Dr. Lwanga rubbished during the Christmas Eucharistic celebrations while at Lubaga Cathedral saying that the massage he released suggesting the postponement of the presidential elections was intended to promote peace, reconciliation, free and fair elections.

Dr Lwanga said challenged bloggers and other social media users, to prove to the general public that he was corrupted or bought by the ruling NRM to suggest for the extension of the current political term noting that it was irresponsible such an attack without first reflecting on the brutal scenes that have rocked the campaigns since the nomination date November 3rd and the commencement of the campaigns on November 9th to date.

He cited the 54 lives lost during the riots following the arrest of NUP president Robert Kyagulanyi in Luuka on November 18th and 19th ,over 100 others injured while close to 1000 arrested and arraigned in courts of law which ugly scenes don’t  include those who have died and injured during campaigns including journalists and Robert Kyagulanyi’s personal bodyguard Frank Senteza Kalibala who died on December 27th 2020 at Busega allegedly crashed by an army truck after he fell from the Electoral commission escort pickup.

Dr. Lwanga reminded Ugandans that America went to the polls and shortly after it experienced suffering in the spread of Covid-19 which they think (UJCC) in case it happened in Uganda many people will die given the poor condition of the Ugandans health standards.

Dr. Lwanga advised Ugandans to desist from ignoring the Ministry of Health guidelines aimed at controlling the spread of Covid-19 because it’s real and kills. In Uganda the pandemic has claimed among others three members of Parliament, a minster Al-Hajji Kirunda Kivejinja and army officers.