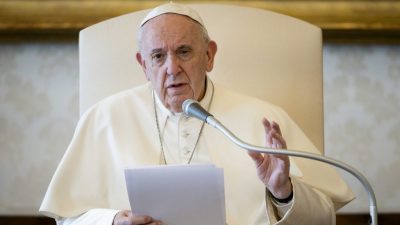 Just Two weeks to his long-awaited visit to the Democratic Republic of Congo and South Sudan that was scheduled for July, Vatican Press office has announced that Pope Francis has postponed the trip to a later date.

In the message from the Holy See released on Friday, June 10, indicated that Medical Doctors attending to the Pope requested him to postpone the visit in order not to jeopardize the results of the therapy that he is undergoing for his knee.

The message read, “the Holy Father has been forced to postpone, with regret, his Apostolic Journey to the Democratic Republic of Congo and to South Sudan, planned for 2 to 7 July, to a later date to be determined,”.

The people of South Sudan have been preparing for the visit which was to include other Church leaders; Archbishop of Canterbury, Justin Welby, and the Moderator of the Church of Scotland, Jim Wallace making the trip ecumenical.

In a recent message shared with AMECEA Online Tuesday, June 7, various groups including youths have been preparing for pilgrim journey to Juba ahead of the visit.

Pilgrims were planning to move from as a far as 400 hundred kilometers moving on foot from different parishes in South Sudan and neighbouring countries to take the opportunity to pray and animate young people about the reality that peace is a journey that all must undertake together,” Bishop Christian Carlassare  a Comboni Missionary of the Catholic Diocese of Rumbek in South Sudan noted in the message.