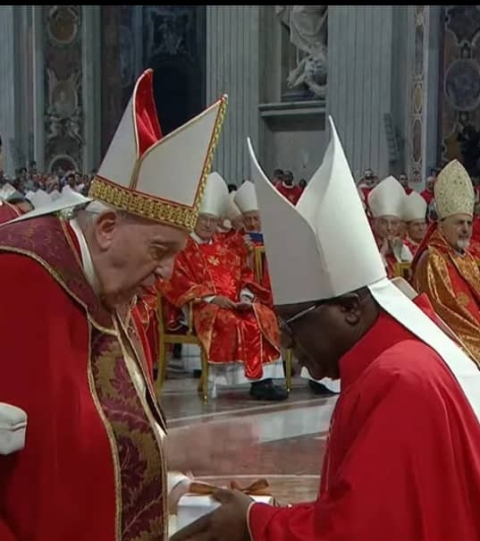 Pope Francis has blessed and Presented Pallium to the new Metropolitan Archbishops who were appointed in 2021 and 2022.

In a special celebration of the Feast of St. Peter and Paul the apostles of the Catholic Church that took place, June 29th 2022 in Rome at St. Peter’s Basilica their Graces received the Pallium that is only won by the Pope or a Metropolitan Archbishop.

This symbol dates back to at least the fifth century, made of lamb’s wool.

It is also the symbol of the bishop as the good shepherd and, at the same time, of the Lamb Crucified for the salvation of the human race.

According to Canon Law (canon 437), a metropolitan must request the pallium within three months of his consecration or appointment (if he has already been consecrated) and may wear it only in the territory of his own diocese and in the other dioceses of his ecclesiastical province.

Among those who received the Pallia is The Metropolitan Archbishop of Kampala His Grace Paul Ssemogerere. He succeeded the late Archbishop Cyprian Kizito Lwanga who died of heart failure in April 2021.

Others were archbishop of Owerri and President of the Bishops Conference of Nigeria, Most Rev. Lucius I. Ugorji,