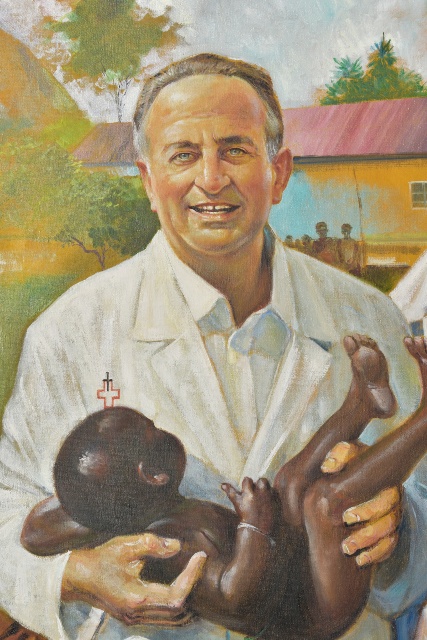 Hundreds of thousands of Catholics and other faithful converged at Kalongo Village, Agago district in Gulu Archdiocese to witness the beatification of Fr. Dr. Giuseppe Ambrosoli.

Fr. Dr. Ambrosoli a Comboni missionary a priest and a medical doctor from Italy came to Uganda in February 1956 where he served for 31 years until the time of his death on 27 March 1987 from Lira in Uganda.

Throughout his life time in Uganda, he loved and compassionately treated the sick, truly depicting the practical and exemplary need to spread the gospel.  After his death People started praying through him and received miracles.

A lady, Lucy Longoko a Karamojong mother who was miraculously healed after praying through the blessed Ambrosoli, whose miracle confirmed in 2019 was based on to confirm his beatification by Pope Francis on 20th of November 2022 at Kalongo.

The beatification exercise held during a Eucharistic celebration led by the Pope Nuncio to Uganda Archbishop Luigi Bianco started with the presentation of the biography of and works of Fr. Dr. Ambrosoli, later Archbishop Bianco read the confirmation letter to his beatification from Rome before Archbishop John Baptist Odama of Gulu.

Fr. Dr. Ambrosoli is a blessed for all and his day will be celebrated every 28th of July.

H.E Archbishop Bianco implored professionals especially those in the medical field to emulate the newly blessed Fr. Dr. Guiseppe Ambrosoli because he presented the true sense of charity, humility, generosity, selfless service while on duty, commitment and availability.

Based on his motto “May your will always be done” Dr. Ambrosoli was extraordinary humble and prostrated the gospel in his daily works by caring for the physical ailments of every one virtues that should be emulated.

Dr. Ambrosoli’s beatification was held on the solemnity of the Christ the King day on 20th November 2022 and H.E Bianco reminded Christians to learn and appreciate Jesus the savior of human kind.

The Archbishop of Gulu His Grace John Baptist Odama in his words asked Ugandans to pray through the intercession of blessed Fr. Dr. Ambrosoli for the country to get rid of the deadly SVD Ebola.

The deadly SVD has since claimed over 50 lives after its outbreak in August this year and many are still undergoing treatment.

He also prayed for the end of the war in Ukraine saying those being killed are human being who need protection and respect that is only granted by God.

He said Archdiocese of Gulu now has three blessed; Daudi Okello and Jildo Irwa whose day is celebrated every 20th of October and now Fr. Dr. Guiseppe Ambrosoli.

President Yoweri Museveni who was the chief guest hailed Pope Francis and the Catholic Church in Uganda for acknowledging the meritorious work of Dr. Ambrosoli a man of God who served Uganda and must be emulated like the holy scriptures say that, man will be judged by his deeds.

Museveni also reiterated his call to the Catholic Church and all Ugandans to use government programs to fight poverty through the 4 acre model of agriculture at intensive level areas like Arua, Gulu Zombo can all grow coffee, fruits, pasture for cows and food crop plus chicken, pigs and fish farming for those with wetlands while those with more land  should practice extensive agriculture.

Museveni says if this is embraced Ugandans will improve on their output and feed the region which will in turn create money for the families and for the entire country.

The relics and portrait of Fr. Dr. Ambrosoli were presented and unveiled to the congregation.

His cause for canonization of Fr. Dr. Ambrosoli opened in Uganda – though held also in Como Italy– in 1999 and he became titled as a Servant of God. The confirmation of his life of heroic virtue led Pope Francis to name him as Venerable on 17 December 2015. Pope Francis later confirmed a miracle attributed to him on 28 November 2019 which would enable for Ambrosoli to be beatified on 20th November 2022 in Kalongo.

His Excellence Yoweri Kaguta Museven the President of Uganda was credited for his contribution of UGX 1.3 Billion towards the beatification of Fr. Dr. Guiseppe Ambrosoli.

Part of the money was earmarked for the refurbishing of Dr. Ambrosoli hospital in Kalongo.