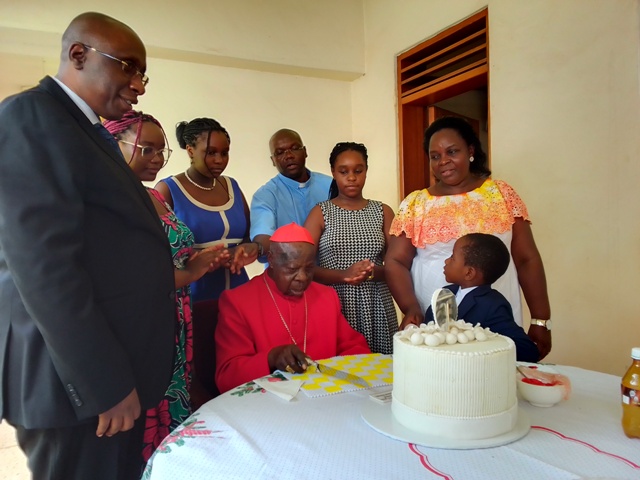 It was joy as friends of His Eminence Emmanuel Cardinal Wamala hosted a feast celebrating 41 years as a Bishop and 28 years as a Cardinal at his residence in Nsambya.

On 22nd of November this week, Cardinal Wamala marked 41 years of Episcopal ordination since he was consecrated bishop and today 26th November celebrated 28 years as a Cardinal.

The Uganda Peoples Defense Forces –UPDF Chief of Logistics and Engineering Brig. Gen. Charles Bakahumura led his family as friends of Cardinal Wamala to mark the two anniversaries at the Cardinal’s residence.

Well dressed in a red plain robe, Cardinal Wamala looked very happy before his friends from Brig. Gen. Bakahumura’s family and was able to feast with them.

Speaking to Radio Sapientia after the feast, Brig. Gen Bakahumura expressed his pleasure to have been allowed by the Cardinal to organize a feast and celebrate with him upon reaching his twin anniversaries.

He however called upon the young people to stop undermining elders, considering them as low thinkers yet the society needs them in any situation.

Those present at the feast included the blood relative of Cardinal Wamala like Fr. Matia Yawe, Fr. Bonaventure Wasswa Ssebyanzi, Martha Nsubuga, a granddaughter to the Cardinal among others.

Cardinal Wamala who is the Archbishop Emeritus of the Metropolitan Archdiocese of Kampala will also be turning 96 years old next month on December 15.