Archbishop Ssemogerere commissions 75th Parish with a caution to Ugandans to protect themselves against Ebola. 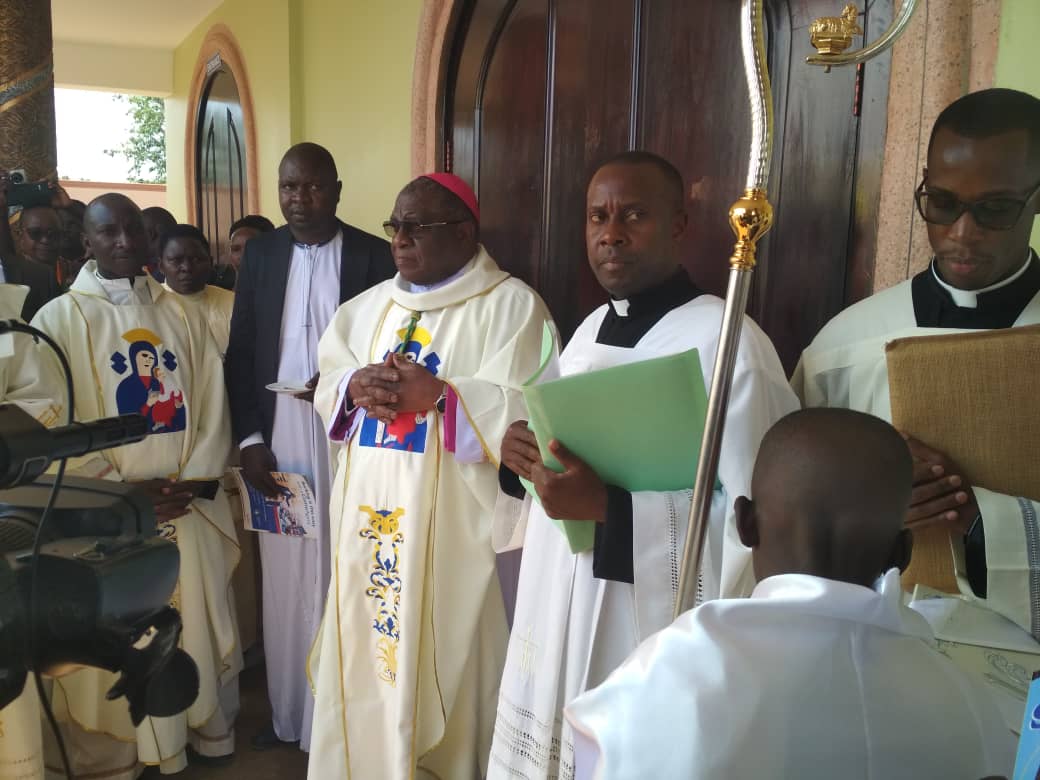 The Archbishop of Kampala His Grace Paul Ssemogerere has commissioned and blessed St. Cyprian Kawanda Parish the 75th new Parish in Kampala Archdiocese.

Rev. Fr. Robert Galiwango an archdiocesan priest who was ordained in 2007 has been installed as the new Parish Priest of St. Cyprian Kawanda Parish.

In his homily he first congratulated the Parish Priest and the Christians who have worked tearlessly to develop the Parish. On this note he hailed one Geoffrey Ssali Ssabachristu of the Boda Boda riders in Kawanda for welcoming him and their commitment to the Church as Catholic Christians in the area.

He said boda boda business is an important aspect in the community but it must be respected by all stakeholders since, it provides employment and support the wellbeing of families. He however challenged the riders to observe the traffic rules while on the road.

Archbishop Ssemwogerere was also proud of the children and their parents who gave him a heroe’s welcome and commended them for respecting life because if they had gone by the vice of abortion such a wonderful population would not be in place.

He welcomed the parishioners who are estimated to be around 5000 for their generosity and urged them remain committed Christians in the spirit of God.

On the general aspect Archbishop Ssemogerere has challenged Ugandans against laxity over the deadly hemorrhagic Ebola disease that was announced in the country in August this year.

He said it saddens to learn of those suspected to have contracted the disease to be seeking for health services from witchdoctors.

He said many countries have imposed restrictions to travelers from Uganda over Ebola others are put in quarantine which is costly.

He hailed the government for the efforts taken to control the spread of the disease urging Ugandans to remain vigilant over Ebola but also Covid-19 still existence.

On the general note, Archbishop Ssemwogerere castigated greed, injustice and corruption which are failing this country Uganda, emphasizing accountability in all sectors including the Catholic Church for better service delivery.