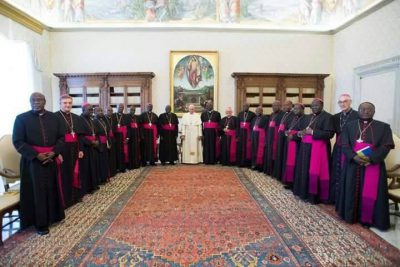 His Holiness Pope Francis has acknowledge the Uganda Episcopal conference for instilling the spirit of faith but warned never to relent like it’s in South Korea.

During the Ad limina meeting with the Catholic Bishops of Uganda Pope Francis decried of ideological weakness towards faith in South Korea a country with a number of saints.

His holiness said Catholic leaders must lead by example if they are to influence the society they serve.

He said the blood of Uganda martyrs should be a source of strength to the Catholic Church in Uganda drawing from Pope Paul the 6th theme; Together with the Christian religion, evangelization introduces a principle, which tends to arouse and develop the native energies and virtues and the latent abilities of the local population.” Ugandans must explore opportunities especially from the youth to develop the church.

The Bishops unlike in the past where each met with the Pope in private this time they all met his holiness together since the challenges from all regions of Uganda affect each other although each presented his report.

This was in an account by the Secretary General Uganda Episcopal Conference Msgr. John Baptist Kauta who coordinated the Bishops’ visit to Rome and Pilgrimage to the Tomb of St. Peter and Paul.

Msgr. Kauta also revealed that Rome also wants some of the commissions merged for better monitoring and operations for example; the Medical Bureau will be merged with Justice and Peace, Pastoral with youth and lay apostolate, Doctrine with ecumenism among others although Tanzania Episcopal Conference has already started to implement it, UEC will take a slow pace with study as it moves towards the same direction.

The Ad limen meeting that takes place after 6 years started on June 12th to 23rd when they returned to Uganda.