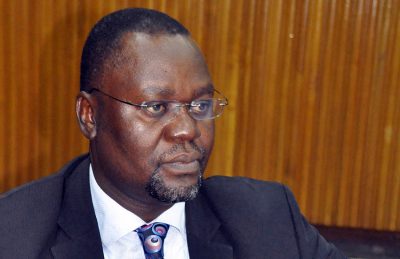 Investigations into the dubious sell of Seven Banks by the Bank of Uganda has resumed by the Parliamentary Committee on Commissions, Statutory and State Enterprises (COSASE) chaired by Abdul Katuntu in a way of verbal attacks against his chairmanship.

Rubaga North Member of Parliament Moses Kasibante who was appointed to take over as Vice Chair to the committee that is to be headed by Kawempe South MP Mubaraka Munyaggwa, overruled Katuntu at the beginning of today’s session saying he is not legitimate and his concretions might be challenged but Katuntu defended himself.

Katuntu said he has never pushed for his stay on the committee nor lobbying for the same post through the speaker of parliament but the same house has a mandate to order for the execution of duties given the need for the good of the country.

Never the less the committee proceeded with the investigations over the documents that were based on to sanction to the selling of the banks.

But the bank officials along with the former Bank of Uganda Executive Director in charge of Bank Supervision, Justine Bagyenda confessed that some decisions were taken without documents and minutes given the urgency of the matters that were at hand.

Posted: Wednesday 9th January 2019 06:30:36 AM
Next:
Catholic Sisters of Bwanda celebrates their day

Previous:
Uganda has a debt of 41.51 trillion Shillings –Gov’t