Uganda has a debt of 41.51 trillion Shillings –Gov’t 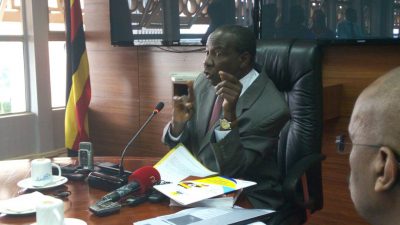 Finance Minister Matia Kasaija has said that Uganda’s public debt is under control, allaying fears that the borrowing had reached alarming levels.

Kasaija says that Uganda’s debt to GDP ratio, now standing at 41.5 percent, will not surpass the 50 percent risky threshold recommended by the World Bank and International Monetary Fund.

The statement was in response to a report released last week by the Auditor General, indicating that the rate at which Uganda is borrowing is worrying and unfavorable given the country’s revenue collection.

The bilateral loans, Kasaija said largely come from the Export and Import (Exim) Bank of China and Japan International Cooperation Agency (JICA) but the two, equally offer favorable repayment conditions that fall in a range between 20 and 30 percent above.

A Bank of Uganda report in September last year warned that the percentage of signed but not yet disbursed debt has been on the rise.

This is caused by low debt absorption capacity in ministries, departments and agencies.