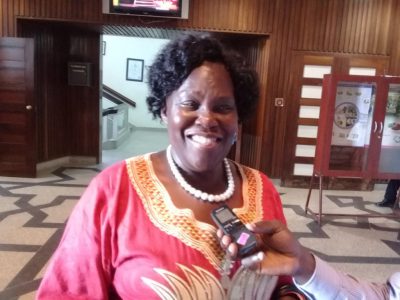 The newly appointed Leader of Opposition in parliament Betty Aol Acan has called for a dialogue among all opposition political parties aimed at keeping a vibrant opposition that is ready to challenge government business.

Acan made the remarks this afternoon as she addressed the house upon her confirmation as the new Leader of Opposition in parliament by the Deputy Speaker Jacob Oulanya, replacing Kasese District Woman MP Winifred Kiiza.

Following her appointment and other MPs on various parliamentary committees by the FDC president Patrick Amuriat last week ,Acan said misconception and accusations a washed the media which she cautions that once not sieved the opposition will lose meaning.

She further also prayed for the Kawempe South MP Mubarak Munyagwa who was appointed to lead the COSASE committee to be brave over the task ahead of him.

Meanwhile, on a lighter note, the West Budama South MP Jacob Oboth Oboth raised a matter of concern whether the house was proceeding well when NRM party was the most happy as Aol was introduced compared to the opposition side that she is leading