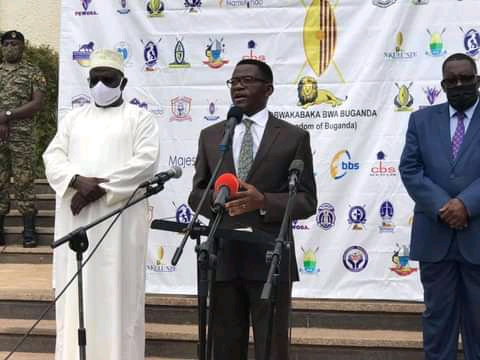 The Katikiro of Buganda Charles Peter Mayiga has revealed that his majesty Ronald Muwenda Mutebi ll’s disposition is related allergy that cause breathing difficulties to his health especially when his wearing a mask or face shield.

Many of the people who graced the 66th kabaka’s birthday in mengo palace noticed that his Majesty’s health was not good which caused public worry.

Speaking to the press this afternoon at Bulange mengo Katikiro Mayiga noted that the allergy is causing his majesty breathing difficulties but immediately confirmed that Heath experts are managing the situation.

He also appealed to Ugandans to disregard rumours on social media indicating that the kabaka was poisoned saying that it’s false and baseless.