CHAOS IN POLICE COURT AS KIRUMIRA TRIES TO SNEAK OUT 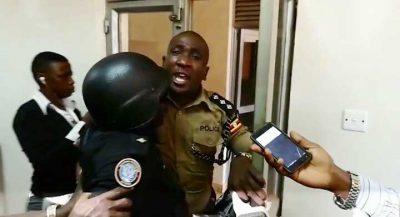 Former Buyende District Police Commander, ASP Muhammad Kirumira has caused panic and unrest in the Police Court that convened at the force’s headquarters in Nagulu when he tried to match out in protest of the hash bail conditions.

He was also ordered to report to the Police Profession Standards Unit (PSU) daily.

This prompted him to protest against the conditions saying it would cost his work and he did not have his phones to contact any senior police officer to stand surety for him since they were confiscated by the officers who arrested him on 1st this month.

Later, he was re-arrested and taken back to Nalufenya, a police detention centre in Jinja District.

On Thursday last week the same police tribunal withdrew the charge of torture and unlawful use of excessive authority against Kirumira by the time he was still the DPC of Nansana after the prosecution led by Catherine Bamusemereirwe reported that one of the witness, Milton Tumusiime, a journalist formerly attached to one of the local tabloids, had turned uncooperative to testify against Kirumira had died while another was untraceable.

However, Kirumira’s father Abubaker Kawooya, his grandmother Madinah Namwanje and Bulenga B zone Chairperson Kalule and several others have camped at the Police Court in anticipation that he would be granted bail.

Previous:
KITATTA, 12 OTHERS REMANDED TO LUZIRA