CDF directs for a probe in the torture of fishermen 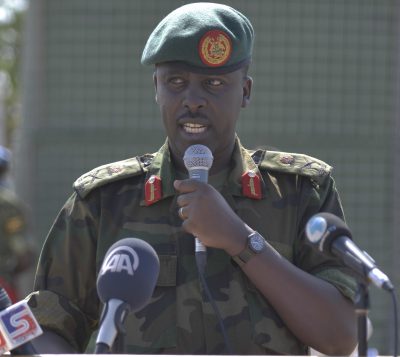 The Chief of Defense Forces General David Muhoozi has ordered for a special probe into allegations of brutality by Uganda People’s Defense Force-UPDF soldiers against fishermen operating on Lake Kyoga.

The UPDF Marine unit under the command of Lt. Col Moses Nuwagaba is currently involved in special operations against illegal fishing practices on Lake Kyoga. The operations are in line with a resolution by Lake Kyoga Management Organization-LAKIMO for a fishing holiday to pave way for a cleanup exercise on the lake.

The operations have seen UPDF soldiers confiscate and destroy illegal fishing gear, among others, undersize nets and boats, However, the soldiers are accused of brutality in the execution of their duties.

Gen. Muhoozi toured Bangladesh and Nalibwowo landing sites in Amolatar district yesterday, where he said he was shocked when area leaders paraded more than 50 residents with injuries reportedly sustained in the hand of UPDF soldiers in May this year.

Simon Peter Ongom, the Amolatar district Chairperson said whereas illegal fishing is dangerous to the Lake, marine soldiers should find better ways of restoring sanity on the lake other than brutalizing residents.