Besigye under house arrest at Kasangati 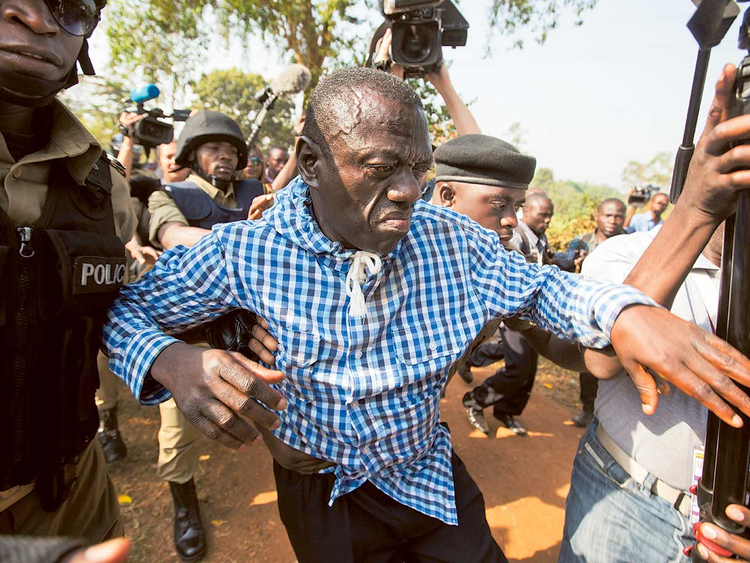 Police have confirmed to have arrested the Former Presidential candidate Rtd. Col. Dr. Kiiza Besigye this Thursday morning and detained at his home in Kasangati, Wakiso district.

Besigye was intercepted by police officers as he attempted to stage a protest over the soaring prices of commodities in the country and an alleged ‘political succession’.

Luke Owoyesigyire, the Deputy Police Spokesperson for Kampala Metropolitan says that their credible source tipped them about Besigye’s protest on Wednesday and immediately they deployed until this morning they managed to arrest him together with his driver Benson Mwesigye, who facing charges of reckless driving after knocking the police patrol.

He emphasizes that though Besigye is allowed by the law to demonstrate, he didn’t inform the police and his intention is to cause havoc in Kampala which is contrary to laws of this country.

Owoyesigyire insists that the deployment at Besigye’s home won’t be withdrawn until he abandons his campaign of inciting the public and causing chaos in Kampala.

Dr. Besigye was nabbed from Kasangati moments after he left his home but earlier, there was a heavy deployment of police to stop him from leaving his Kasangati based home.

He was destined to launch his latest campaign dubbed ‘Wakeup call’ after his statement on May 7, 2022 that showed his plan to start an a programme called ‘Tusimbudde’ or Transition not Success’ aimed at ensuring a smooth transition to a new leader, rather than a succession from President Museveni to his son.

This is after Dr. Besigye dismissed Lt. Gen. Muhoozi Kainerugaba’s birthday celebrations as aimed at launching his presidential bid which they say is a succession plot.

Speaking before the arrest, the four-time presidential candidate said his intentions are aimed at mobilizing citizens to protest against the hiking commodity prices in the country.

He called for downsizing of parliament and claimed swindled funds from corrupt government officials.

Matia Kasaija, the Minister for Finance, Planning and Economic Development has since linked the skyrocketing price of commodities to high prices of fuel and Russia’s invasion of Ukraine.

Currently, most of the prices of essential commodities in the country have doubled.