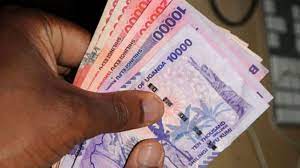 As investigations into the mismanagement of Covid19 relief continues by the parliamentary Public Accounts Committees, it has been discovered that some town agencies registered and received money from them as priests.

This Monday, the Local Government Public Accounts Committee chaired by the Bardeg-Layibi Constituency Member of Parliament Martin Ojara Mapenduzi as it interacted with the officials from Arua City, it was found out that out of the 14 contracted town agencies that were cleared to register and enter data of beneficiaries, impersonated and received money as priests.

It was also discovered that others registered their relatives under false categories that were not their true job employment.

It’s from this that the chairman Mapenduzi  surrendered the culprits to the parliamentary Criminal Investigative Department (CID) for more interrogations and also those who had falsely received and willing to return the money to hand it over to the CID.

The MPs also found that the first Covid-19 cash beneficiary, Mr Geoffrey Olanya, who was announced by Prime Minister Robinah Nabbanja, is not a boda boda cyclist, as earlier indicated.

The money had been earmarked for vulnerable people badly affected by the second Covid-19 lockdown such as saloon workers, restaurant workers, teachers of private schools and boda boda cyclists, among others.