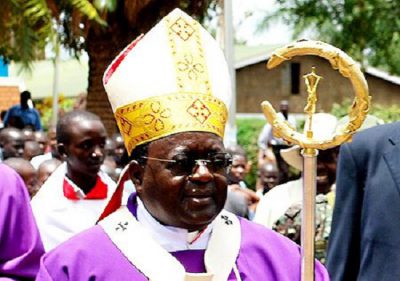 The Archbishop of Kampala His Grace Dr. Cyprian Kizito Lwanga has celebrated 20th anniversary of his episcopate at Kasana- Luweero diocese today.

Archbishop Dr. Lwanga was consecrated on March 1, 1997 as the pioneer Bishop of Kasana- Luweero Diocese.

Celebrating the homily mass of the anniversaries, the Bishop of Kasana- Luweero Rt. Rev. Paul Ssemwogerere acknowledged the Archbishop for his wonderful service he rendered in the diocese and in the Archdiocese of Kampala as a whole.

Bishop Ssemwogerere recommends that Dr. Lwanga built a strong foundation of the diocese by establishing churches, schools and hospitals among others that have helped the general public.

He also emphasizes that the schools Dr. Lwanga established in the diocese, are among the best performers in academics in the country.

However, the Katikkiro of Buganda Charles Peter Mayiga applauded the priests for being strong and determined to deliver God’s work by building schools and hospitals that are necessities for the public.

The function has been attended by various dignitaries and Christians from government, Buganda Kingdom, Members of Parliament, laities, religious leaders from different denominations among others.