WHO attributes Ebola outbreak in Uganda to late detection 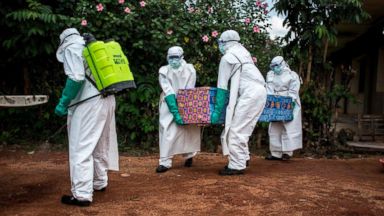 Preliminary investigations suggest that the patient could have developed symptoms in August but it was not immediately picked up as an Ebola case.

At least 24 people have so far tested positive for the Sudan strain of the Ebola virus, which has left five people dead.

Dr Patrick Otim, who is overseeing the Ebola response in Uganda, has said that response teams on the ground are finding it difficult to identify patient zero.

This is because by the time Uganda declared the outbreak several deaths had already been reported in the community – with many more having attended funerals.

Dr Otim said it is suspected that these deaths could have been caused by the Ebola outbreak.

The symptoms of the Sudan strain are similar to other diseases such as malaria and typhoid, which are endemic in the affected areas, and are proving a challenge to medics.

There is no vaccine for the Sudan strain of the Ebola virus, as this type of outbreak is rare.

The only available vaccine is effective against the Zaire strain that has caused outbreaks in West Africa and neighbouring Democratic Republic of Congo.