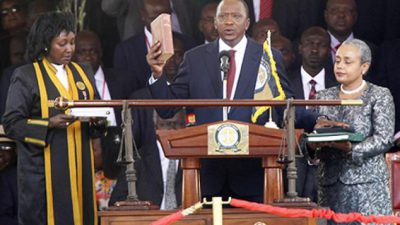 In his inaugural speech shortly after swearing in for the Second and Final 5 year term as president of Kenya at Kasarani Stadium in Nairobi Kenyatta said he will not tolerate bureaucracy because it denies Kenyans quality service delivery.

Another first point on the agenda is to engage with the judiciary to address the challenge of case backlog to ensure that Kenyans have justice.

However he urged Kenyans to stay away from divisive politics and embrace unity.

Uhuru took oath of office administered by Anne Amadi, the Chief Registrar of the Judiciary with a Bible said to have been used by the first President, Jomo Kenyatta, at his own swearing-in at Independence in 1963.

His Deputy William Ruto similarly took oath, with the crowd chanting, “2022” as he was introduced.

Meanwhile Raila Odinga made a U-turn and announced that, he will also be sworn in as “the people’s president” on 12th next month in accordance with chapter 1 of the constitution which states that sovereign power belongs to the people.

He made the declaration moments after Uhuru’s swearing in, as he led his supporters to Jacaranda grounds in Embakasi, Nairobi, for a prayer rally but were dispersed by police.

He will take Oath on Jamhuri Day, claiming to be the legitimate president basing on the results of August 8 presidential election which court nullified.

Police has been forced to fire live bullets to disperse and arrested the NASA supporters that had gathered at Manyanja, Donholm road. Police is still patrolling on different streets of Kenya to eliminate protesters.

Previous:
EC USED ALL THE ALLOCATED FUNDS ON THE SUSPENDED LOCAL COUNCIL POLLS.