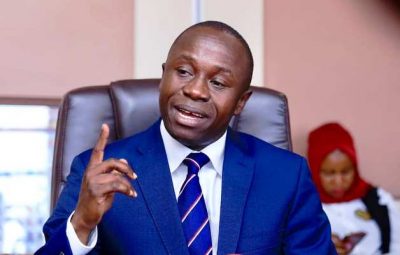 The state minister for ICT Peter Ogwang says that Ugandans ought to understand government’s decision to facilitate school going children to learn from Radios and televisions as this is to help them acquire knowledge but not necessarily that they will be examined via the same medium.

President Museveni in his address to the nation said that government is planning to give out about 10m radio sets for this purpose.

Ogwanga was appearing before the parliament committee of ICT and here, he was responding to a number of questions raised by the chairperson of the committee Annet Nyakecho regarding the preparedness of the ICT ministry together with the UCC in line with ensuring that the scientific election guidelines announced by the electoral commission are favouring all the participants.

Among the many guidelines is the usage of media for campaigns and here, the country is looking mostly at Radio and TV station and social media forums.

Nyakecho demanded to know the readiness of UCC at ensuring that candidates get free airtime both on radios and TVs. She also highlighted the unequal distribution of internet across the country despite the fact that most campaigns will be made via social media among other pressing issues like regulating including social media during the campaign period.

In response, minister Ogwang says the plan by government to distribute radios is only to help students acquire knowledge.

Ogwang further admits that it’s true the internet is not all over the country but there other media forums that the candidates can use to reach out to their voters.

According to UCC, 6million Ugandans are fully connected to internet and use smart phones.

Meanwhile, Ogwang asked the committee for more time of which his ministry will come back with a comprehensive response to all queries surrounding the scientific campaigns and elections as they have to first have a number of discussions with all the concerned government entities on how best the scientific elections will be handled.