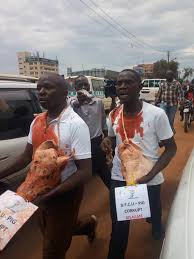 The duo stormed CPS Kampala at around 1 pm with fresh pig heads tied around their necks and blood stained shirts.

They told police that they were protesting the rot in Bank of Uganda that has led to the closure of several commercial banks in the country since 1993 and leaving many employees jobless.

They also claimed that they were responding to summons by the Police Spokesperson to investigate the masterminds of pig protests in the city.

This is just after two weeks when unidentified protesters dumped two piglets at main gate of Bank of Uganda bearing the name of Juma Kisaame, the outgoing Director DFCU bank.

Addressing journalists shortly after the arrest of the duo, City lawyer, Isaac Ssemakadde said Police is under trial with this kind of protest.