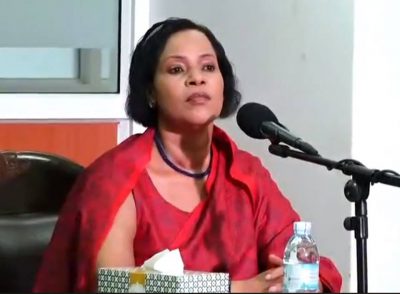 The Queen mother of Tooro Best kemigisa has burst into tears while accusing her in-laws of harassment over land belonging to her late husband King Patrick David Olimi Kaboyo.

This was during a cross examination by the commission of inquiry into land matters Deputy Lead counsel John Bosco Suuza leaving her supporters in somber mood.

Kemigisa was accused by Aunties and Uncles of the reigning King led by Prince Gilbert Mugyoja and Prince Hilali Kasagama of selling 13 pieces of their land to government and mismanagement of the kingdom affairs.

Kemigisa says that her in-laws didn’t want her to own any land after the death of her husband claiming he didn’t own anything apart from a shirt and a sweater.

Kemigisa has in the same way told the commission that the land he sold to government belonged to her husband also accusing the in-laws of tarnishing her name in media that she stole their land calling for protection from the commission.

However, the commission advised Kemigisha to foster dialogues that could solve out all the disagreements among the royal family members.