The Media should be responsible government ministers insist. 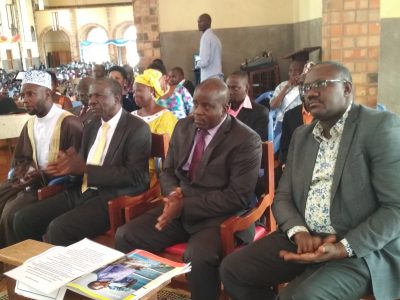 The minister for finance Matia Kasaija has noted that the concern of the high broadcast license fees and prepayment implemented by the Uganda broadcasting commission UCC will be discussed with the concerned authorities to save the situation.

However Kasaija hastened to add that some media houses disseminate wrong messages that pedal lies which he said was a satanic.

Minister Matia Kasaija said the media must be responsible to avoid what befell Rwanda in 1994 not to happen in Uganda media should work for peace and unity. He also emphasized the radio to be used to remind people of Bunyoro to work hard for their families.

The Minister of ICT represented by the Permanent Secretary Vincent Bagyire said they currently have 290 FM radio stations in the country and over 200 applications are pending which gives them a hard moment  because there is no spectrum for all those applications.

He emphasized that he was tasked to review the 300% tax increment on licensing fees e.g a license of UShs 4 million was increased to Ush 16 million which he says it is unfair.

He says he have advised UCC not to implement such abnormal broadcasting fees.

Bagyire says it’s important for FM radio stations to be responsible while they execute their duties.

They fundraised at least Ushs 35 million in cash and pledges towards the purchase of the diocesan public address system that requires Ushs 70 million.