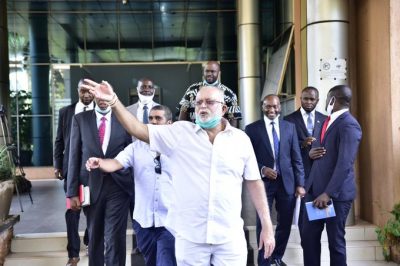 The Court of Appeal has also dismissed a multi-billion case against businessman Sudhir Ruparellia and his Meera Investments Company in which the Central Bank accuses him of siphoning over 397 billion shillings from his former bank.

Three justices of the court including; the Acting Chief Justice Alfonse Owiny-Dollo, Cheborion Barishaki and Steven Musota have unanimously ruled that after a careful perusal of evidence; they too find no misconduct against Sudhir that would warrant litigation and henceforth they have ordered Bank of Uganda to pay costs incurred by the businessman to defend himself in both the Commercial Court and Court of Appeal.

In their ruling read to court by registrar Mary Babirye, the Justices have also confirmed that at the time of filing this suit in January 2017, Crane Bank Limited was already in receivership and a non-existing entity whose lifetime was terminated when Bank of Uganda sold its assets to DFCU in October 2016.

The justices have been in further agreement with Commercial Court judge, David Wangutusi that being in receivership; Crane Bank had no capacity to institute legal proceedings against its former Director or could anyone drag it before court because it had no assets to be claimed for.

But having been dissatisfied with the above position; Bank of Uganda petitioned the Court of Appeal last year to challenge the decision by justice Wangutusi to condemn it to pay costs yet he did not fully hear the case but disposed it off basing on a point of law.

The Court of Appeal has instead also further condemned it to pay costs having found out that the Central Bank wrongfully dragged Sudhir to court.

Bank of Uganda and Crane Bank had wanted Sudhir and Meera Investments Co. to pay back over 397 Billlion shillings that it claims the two fraudulently took out of Crane Bank where Sudhir owned 100% shares.

Immediately after the court ruling; Sudhir who was in company of his son Rajiv and lawyers of Kampala Associated Advocates explained that someone in Bank of Uganda stole that money which would have been helping government in this Covid-19 pandemic.

He also announced that he will be seeking millions of dollars in costs.