South Sudan Talks back in Kampala 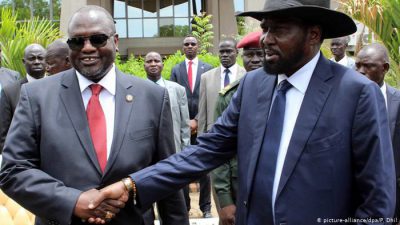 The president of South Sudan Salva Kiir and his former deputy Dr Riek Machar, are in the country for talks before the November 12 deadline to form a coalition government expires.

The two leaders are attending a closed meeting with President Yoweri Museveni at State House Entebbe. The meeting is also being attended by Mr Kalonzyo Musyoka, who is representing President Uhuru Kenyatta of Kenya.

The foes, whose falling out in 2013 triggered a bloody civil war that has left almost 400,000 people dead and sparked a major humanitarian crisis, signed a peace deal in September last year that is meant to see them reunite once again in government.

The deadline for the formation of this government, in which Dr Machar will serve as first vice president, has already been delayed once and is now set for November 12.

However crucial technical steps contained within the agreement, such as creating a unified army and agreeing on the internal boundaries of states, have failed to make progress.