Security seal off NUP and take their 7 million signatures. 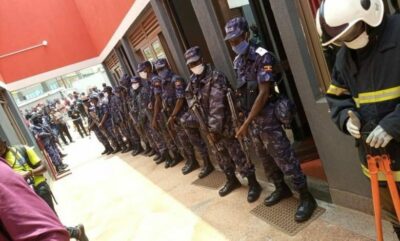 Security operatives comprising of the police and the army have raided The National Unity Platform (NUP) headquarters in Kamwokya.

It’s understood that the security officers demanded to know what was happening at the headquarter however this morning the NUP board executive had hosted a meeting with their youth leaders before the raid.

The security personnel has gained access to offices and are currently conducting a search. Information reaching our desk indicates that some NUP members have been detained and parliamentary aspirants who had gone to clear with the party, ahead of their nominations tomorrow. The officers have searched the offices for undisclosed materials.

Justus Akampurira, the Deputy NUP Electoral Commission Secretary has told our reporter that they had no idea why police raided the offices but hastens to add that this could be one of the ploys to frustrate the nomination of their presidential candidate, Robert Kyagulanyi Ssentamu.

However in a few minutes from now the Party Spokesperson Joel Ssenyonyi has said that Police have taken over 7million signatures of their candidate Hon. Robert Kyagulanyi who wants to hold their flag for position of the president in the 2021 general elections.

Ssenyonyi questioned whether police has become the electoral commission because there was no reason as to why they would take the documents for the MPs and Hon Kyagulanyi but their ultimate aim is to frustrate their efforts to liberate this country.