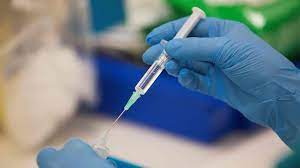 The fake COVID-19 vaccines that were given to over 800 people were 99 percent water, according to the State House Health Monitoring Unit.

According to analytical results from the Government Analytical Laboratory and the National Drug Authority, the water that was put in the vials and passed off, was AstraZeneca COVID-19 vaccines had few impurities and the water was most likely was bottled.

The results come following the arrest of two nurses and the pursuit of one Frank Baguma, a Makerere University dropout who masqueraded as a doctor in the fraud.

According to investigators, Baguma was the one who approached companies to offer COVID-19 vaccination at a price.

Dr Warren Namara, the head of the unit says the impurities that were discovered in the water are normal and should not be a cause of worry. He says the water was not boiled but declined to reveal what impurities were found in the water.

According to Namara investigations are still ongoing on where the vials used came from.