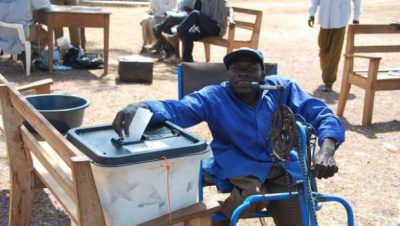 Persons with Disabilities (PWD) have asked Government to increase on their representation in Parliament from four Members of Parliament to eight representatives to address their needs.

The call was made by Alex Ndeezi, a PWD MP for Central Region during a media briefing today at Pope Paul Memorial Hotel during the opening of the second day of their National General Assembly organized by National Union of the Disabled in Uganda (NUDIPU).

Uganda is said to have more than 4 million PWDs represented by only 4 Mps, a number they want to be increased for fair representation.

Ndeezi says although a few areas have been addressed under the National Council for Disability Act, 2003 and the Persons with Disabilities Act of 2006, a lot remains hanging.