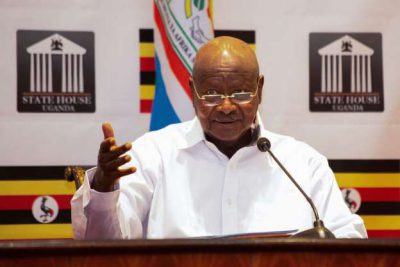 President Yoweri Museveni has threatened to sack over 1000 public officers involving in corruption claiming that the National Resistance Movement (NRM) has the capacity to end this disease.

During his News years message Museveni emphasized that appointing Lt. Col. Edith Nakalema to head the Anti – Corruption unit in the statehouse didn’t mean, replacing the Inspector General of Government (IGG) but helping her in the fight against corruption.

President Museveni warned political actors to desist engaging in actions that intends to destabilize the country.

According to Museveni, the challenge with politicians is that they fail to differentiate participating in active politics from acts of indiscipline.

Meanwhile, the President declared his direct involvement in leading the struggle against illegal land evictions saying that those mostly affected are the ones he led in the resistance force .

He has also urged youths to pray as they work instead of spending time, running to places of worship for wealth miracles.