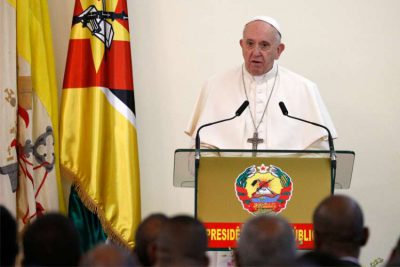 Pope Francis has expressed happiness on returning to Africa and in seeing Mozambique’s “renewed future of peace and reconciliation “after 17 years of civil war between government and Mozambican National Resistance (RENAMO).

RENAMO, a militant organization and political movement in Mozambique is said to have killed over a million people and displaced thousands of others.

In a speech at the colonial-era Ponta Vermelha Palace in Maputo, Pope Francis told President Filipe Nyusi, dignitaries, diplomats and high-ranking clergy that through prayers along with the Catholic Bishops, he looked to seeing a united country with peace, reconciliation and hope.

He hailed the agreement signing in the Gorongosa Mountains last month of the cease-fire treaty between the country’s once-armed political opposition and its government.

The Pontiff added that they have experienced suffering, sorrow and affliction but have refused to let human relationships be governed by vengeance or repression, or to allow hatred and violence to have the final word.

The pope also expressed solidarity with those affected by Cyclones Idai and Kenneth, which devastated the country this year, urging the country to resist draining resources and wounding the environment via foreign interests.

Francis who arrived in Mozambique last evening will on Friday celebrate a mass at the giant Zimpeto stadium in the seaside capital Maputo that is expected to attract over 90,000 people before leaving to Madagascar.